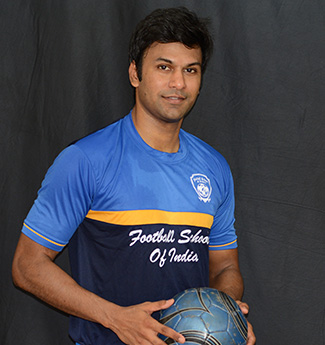 Abhishek Yadav (born 10 June 1980) is an Indian professional footballer who plays as striker for Mumbai F.C. in the I-League. Abhishek is known for his ability in the air as he stands at 6 ft 2 in (1.88 m) tall. He also runs his own football academy, “Football School of India”, which provides professional football training.

During his youth, Abhishek Yadav played for local team Rashtriya Chemical Fertilizers (RCF) in the 1998/99 season. After finding success at RCF, Yadav began his professional career at Mahindra United.

For the 2000-2001 season, Yadav signed with Churchill Brothers, but returned to Mumbai to play for Mahindra United after just a season. Yadav then spent five seasons with Mahindra United where he won all of the major Indian trophies – Durand Cup, IFA Shield, National Football League (the I-League replaced the NFL), Federation Cup and Mumbai League. In 2007, Abhishek joined Mumbai FC.  After joining the newly founded club owned by the Essel Group, Yadav said the move was a “calculated risk” but cited David Booth and Henry Menezes as reasons for joining.  The “calculated risk” paid off in 2008, when he helped the team win the I-League 2nd Division, thereby allowing the team to be promoted to the 1st Division of the I-League. Now captains the side and lead from the front scoring 9 goals for the season and the top scorer for the club.

Yadav has been involved with the Indian national squad since 2002. During his debut, Yadav came off the substitutes bench and scored the winning goal in the LG Cup final against Vietnam. This was the first trophy India had won abroad in 28 years. 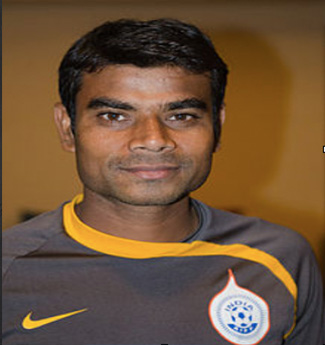 Deepak Kumar Mandal or just Deepak Mandal (born 12 October 1979) is an Indian professional football player currently playing for East Bengal F.C.. He plays as a defender and is known for his high work rate which was rewarded with him winning Indian Player of the Year in 2002. Mondal has played for East Bengal Club, Tata Football Academy and JCT FC.

The Noamundi born defender has played in every defensive role both at club and international level with equal consistency. After graduating from the Tata Football Academy in 1998, the year which had graduates like Mahesh Gawli, Lukram James Singh etc., Deepak Mandal signed for JCT. But he came into the limelight during his spell with East Bengal.

His performances for the red and gold brigade impressed many and in 2001 he made his international debut. Although not the tallest, Deepak is very good in the air but his real strength lies in the tackles and the ability to read the game and make vital interceptions. He won almost every major trophy with East Bengal including the historic ASEAN Cup.

But before winning the ASEAN Cup in 2003, it was the year before that Mandal established himself as one of the best defenders of India. He was at the top of his game while playing for East Bengal but it was in the twin friendlis against Jamaica that Mandal impressed the most. He was adjudged as the 2002 AIFF Player of the Year. Mandal then moved to Mahindra United and constituted the best defence in the country along with Mahesh Gawli, N.S. Manju and Surkumar Singh. Mandal’s performances helped Mahindra win their first ever Federation Cup and National League title.

Mandal returned to Kolkata, this time signing for Mohun Bagan. In his three years with the Mariners the experienced defender has won the Federation Cup once and finished runner-up in the I-League. During Bob Houghton’s tenure he has been a regular in the squad but injuries have prevented him from earning a place in the starting eleven. Emergence of the likes of Gouramangi and Anwar, now sees Mandal being considered as fullback but his experience of representing India for nearly a decade will be very important in the Indian dressing room during Qatar 2011.

On 17 August 2011 it was announced that Mondal signed with Prayag United S.C. of the I-League. 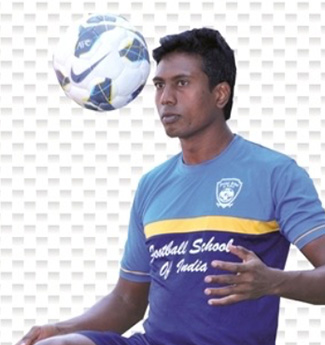